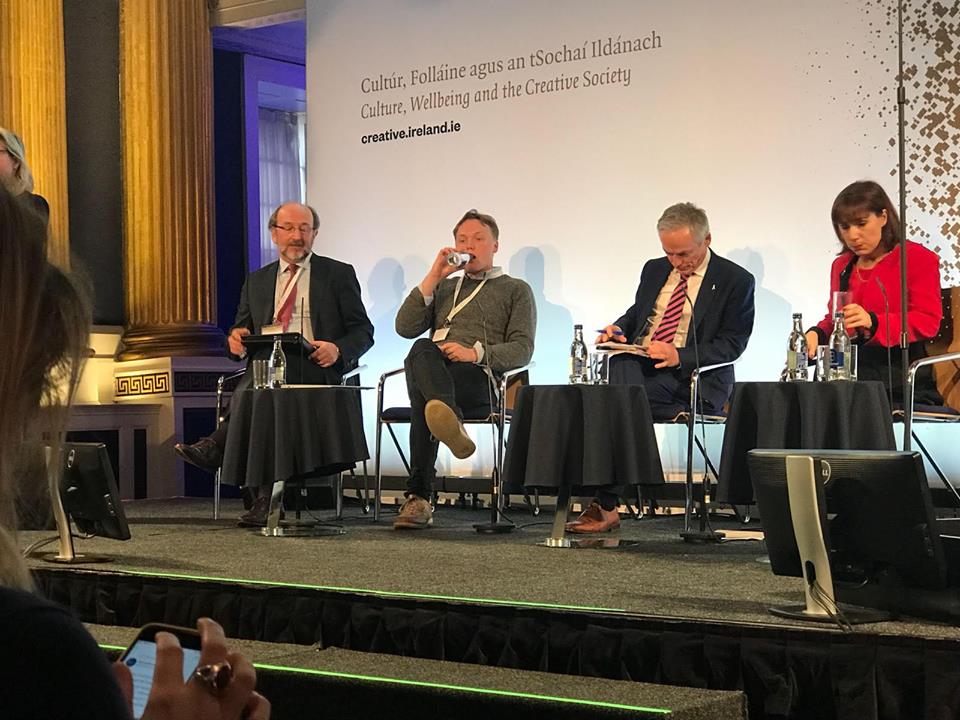 I think childishness is an underrated quality.

My name is Dan Colley I’m Director of Collapsing Horse, a theatre, art and festival production company who believe in ghosts.

We make work that we, ourselves ,want to be in the audience for. We’re making theatre pieces that we want to see and we’re producing festivals we want to be at. Sometimes, the people in the audience with us are children. But our essential driving force is wanting to see things that don’t exist, so we have to make them. I say again; we believe in ghosts.

We have a vision for our theatre company. It’s entertaining, it’s popular, its shows are seen as part of a night out, being among community, like pre-drinks, going to a match or watching the latest episode of RuPaul’s Drag Race. It’s serious about play. Like a combination of a soap opera cast and a travelling troupe of Elizabethan players; this is live theatre, created by virtuoso performers, working as a dynamic ensemble, putting out work quickly and regularly… our theatre is a space for the audience to witness something that is teetering on the edge of either failure or glory, to enjoy that drama, that comedy, and to be generous to it and to each other. We take playfulness very seriously.

In terms of our work that, as I like to say, turned out to be for children, last year, we collaborated with animator Jody Barker-Rockett to make a theatre piece about relativity, space and time travel for 4 – 6 year olds. This year we co-produced Young Radicals, a strand of the Dublin Fringe festival focussing on young audiences and young make. Our Producer Kate Ferris curated an extraordinarily eclectic and strong programme that featured everything from a Dutch classical music performance for toddlers, a battle of the bands for teenagers where they played on the same bill as established “grown up” artists, and much in between.

This year and into next we’ll be working with the members of D15 Youth Theatre in Blanchardstown as we share our skills with them through a workshop series, and they will be the first audience for our new piece about dancing plagues of the middle ages. It’s about bodies, autonomy, fitting into your skin and losing your mind. We hope they’ll be in to that. We are.

This year, and in to next we’re working with students in Larkin Community College on a Museum of Rights, produced by Máire O’Higgins a remarkable teacher at that incredible school, and supported by the Ombudsman for Children and the National Museum of Ireland. Through a series of workshops forty 13 and 14 yr olds are collaborating on curating an exhibition. They are selecting objects to tell their story, giving insight into their experience and how the United Nations Convention on the Rights of the Child relates (or doesn’t relate) to their lives.

But, and this is an important thing to emphasise, we’re not a national cultural institution , we’re not even regularly funded by the state… the work that we do is not out of duty to anything other than our own instincts as artists.

That may sound like a bit like a shirking of responsibility but I mean it to speak more of the melting away of the imagined distances between children and adults – and implicitly children and the mainstream of their society – and in fact meeting together in a place where we’re all citizens, with something to learn from each other.

Why do we work with children and make work for and with children? The answer is a shrugging, agnostic “why not”?  We come from a generation that, for better or worse, sees very little difference between children’s culture and our own grown up, mainstream culture. We’re the generation that unselfconsciously loves Pixar films and will go see the latest release, unaccompanied by a child. We come from a generation that doesn’t own houses, that’s not getting married, that’s not having kids, that has a dependency on our own parents, that won’t work in any old job, it has to be fulfilling and meaningful, and conscientious.

And so much of what we hear said about our generation is that we’re overly sensitive and childish, arrested in our development. But here we have the age old struggle; a generation shifts and so does its values. You may say I’m childish and I say “yeah, and wha?”

In defence of childishness; children are curious and ask the best questions, children are playful and imaginative, children have a clear and uninhibited sense of natural justice, they’re demanding, children are naturally creative and social. Children are a minority group and have the useful perspective of outsiders.

Darren O’Donnell, a Canadian artist who often works with children and other outsiders, his work upends received understandings of power and responsibility in society. His piece, “Haircuts by Children” is pretty well exactly what it says on the tin. Another piece called “The Floating Curator” demands of the person who commissioned him, spend time at their local municipal pool and make friends with a child they don’t know. The uncomfortable turn you feel upon hearing that is all part of the experience. He calls it “social acupuncture” ;  finding pressure point in the body politic, applying an initially uncomfortable intervention but which then allow a release of tension and an unblocking the flow of energy.

At Collapsing Horse we’ve taken to saying “we believe in ghosts” We believe that dead things can be brought to life through art. We believe that a group of people coming together and suspending their disbelief can will things into existence that didn’t exist before. We believe that just because something is in your head, doesn’t mean it’s not real. It’s about making the intangible, tangible. We also believe in ghosts in a slightly different sense. “We believe” in the sense that we back, like “I believe in you” and ghosts, like invisible or voiceless people.

It’s a statement of values and our aesthetic that’s confident in its childishness. It trusts children. It says to children “Yes and…” or “No but…” It says your reality is important, your perspective is valued. Your voice his heard.

This country is polluted with ghosts. We tell ourselves about it all the time, we tell the world about it. Our writers, our artists, our musicians. Sure you can hardly move in this place without falling over a poet communing with ghosts.

Which is remarkable because we are not, by international standards, very good at investing in creativity. Think then, of the potential that could be released if we were.

And we made worryingly little progress in budget 18 on the Taoiseach’s ambition to double investment in arts and culture. We heard earlier from him that it’s not necessarily about investing in the Arts Council or Sports Ireland and I understand that there are many stakeholders, not just artist. But I do have to warn against instrumentalisation of art. Because, it’s true what Mya Angelo said as he quoted it earlier. Creativity is not like other resources it doesn’t get used up the more you use it. But it’s also not like other resources in the way that when you try to exploit it, it recedes. It runs through your fingers, it’s mercurial.

And here we are looking at a really encouraging road map for the future. So I would suggest, as we move forward, looking at it a little differently. Rather than see the arts and culture as very good value , “look how much we get for so little”,  I ask you instead to consider something else; what an untapped resource we have . What great big wells of creativity must be just under the surface considering the geysers that break free of it now.

Think what we could do, if we became a world leader in investing in creativity. Let us be the Qatar of creativity. Let our schools be overflowing with the stuff, buzzing with the business of putting on plays, of telling stories, of challenging the status quo, with artists tripping over each other in the corridors. Let immigrants come from all over the world to make art here, to show in our exhibition halls, to transform our streets, to sing in our pubs and concert halls. Let the video game designers and the chaos organisations of the future look at the pockets of the west of Ireland and think ; yes that’s where we need to be.

Let’s do that. Let’s value creativity as a natural resource that requires investment. Let’s not only values the great, iconic successes, but also nourish a healthy ecosystem from which they can emerge. When we think about the value of creativity, let’s consider it a hard commodity yes, but let’s also allow for the peculiarities of the resource we’re looking to cultivate. Creativity is a delicate thing. It will recede if you try to exploit it. Not every speculation and exploration will yield. But you have to invest and explore anyway and in the end, on aggregate, it pays dividends.

I would say, let’s get really serious about play.